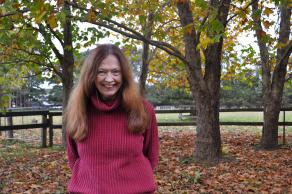 Dr Susanna Price’s bequest to Burgmann College is a tribute to her father, to the progressive and inclusive collegiate experience at the foundation of a lifelong career in international development—and to future generations of students embarking on their journey to independence.

The daughter of Dr Charles Archibald Price AM—like every Burgie since—owes her Burgmann experience to her own father’s efforts to build the College.

As professorial fellow in the Australian National University’s (ANU) Department of Demography, Charles was following in the footsteps of his father, Sir Archibald Grenfell Price CMG, founding master of St Mark’s College, University of Adelaide (1925-1957), when he became a passionate advocate for the establishment of Burgmann College.

“Dad grew up in St Mark’s—he would sit with the students in the dining room, and as an undergraduate became a St Mark’s scholar. My grandfather had been at Oxford University, and Dad followed him in due course; they were both influenced by that collegiate experience and interested in pioneering it in Australia.”

Not only did Charles play a pivotal role in planning and founding Burgmann, but he worked devotedly to secure philanthropic support through his connections to build it brick by brick. This included securing support for memorial rooms at the College, such as the Dining Room in memory of Antony Lucas, the Master’s Residence in memory of Sir John Sulman, and the Grenfell Price Room, named in honour of Susanna’s grandfather and funded by the Price family.

Susanna was at that stage a resident in Ursula College, working towards her Bachelor of Arts in Social Anthropology at ANU, but as soon as Burgmann opened its doors, she became a foundation resident (1971-1972).

She recalls it was “a very exciting time” to be there, during the iconic moments that have become the stuff of Burgmann legend, including the creation of St Beryl.

“It was a lot of fun and lovely to be part of those founding traditions.”

It is more in hindsight Susanna appreciates how Burgmann’s progressive egalitarian and inclusive ethos was an integral part of the career she forged as a social development specialist.

Now internationally recognised for her social policy work on displacement and resettlement in the Asia Pacific, Susanna began her career with AusAID (then known as the Australian Development Assistance Agency) after completing her Master’s degree in 1978. She progressed her development work with the Asian Development Bank (ADB) from 1996 to 2003, based in Manila, during which time she also completed her PhD at the University of Kyoto in Japan. Susanna was invited to join ANU’s College of Asia and the Pacific as a Visiting Fellow in 2004, where she continues to teach as an honorary lecturer in the School of Culture, History and Language, while living with her husband Jack on a working farm in the Southern Highlands.

Susanna’s bequest to Burgmann is an opportunity to further her father’s work, and to share the impact it has had in her own life.

“Burgmann was such an important part of my education—and Dad's endeavour over all those years to get it going. I also wanted to honour all those people who have contributed so much to Burgmann over the years.

“For students coming in at 17 and 18, who don’t know anyone…Burgmann is a really important part of giving them a ‘family’.”

“For students coming in at 17 and 18, from all over the country, who don’t know anyone, [Burgmann] is a really important part of giving them a ‘family’ and support in that first couple of years.

“For postgraduate students coming from all over the world, who are taking a similarly big step to come to Australia, it's important for them also to have that sense of a supportive community.

“There is a lot to admire in the collegiate experience Burgmann has updated for the 21st century, while still retaining its iconic traditions.”

To find out more about leaving a gift in your Will to Burgmann College, download a copy of our Gifts in Wills Booklet, or contact Director of Advancement Ms Amelia Zaraftis, ph: +61 (0)2 6125 6890, email: giving@burgmann.anu.edu.au