Ms Dawkins, a Schwarzman Scholar, advised that The Honourable Kevin Rudd was in residence for 10 days at Schwarzman College hosting conversations with students and faculty. The focus of the program was on delivering workshops for students on ‘Politics with Purpose’, a rumination on the intersection of personal values, moral imperatives, and the limits of politics.

Alice completed two honours degrees at ANU, one in Asian Studies in 2016 and one in Law in 2018. Alice is currently studying at Schwarzman College in China with studies focused on China’s rise in global perspective, with classes in finance, economics, and policy. Alice worked at a premium Chinse sports & lifestyle brand and completed a dissertation on Chinese concepts of authenticity, as applies to the Australian imported wines market. During her studies, Ms Dawkins has become increasingly engaged with the issue of the future to work, namely, the impact digitisation and artificial intelligence will yield on both job security and economic inequality for Australians into the future. Ms Dawkins is looking forward to returning to her home state of South Australia to reflect on what she has witnessed in China and become an advocate for working people.

The College is proud that two Burgmann alumni, Alice Dawkins (2012-2015) and Ross Tan (2008-2011), are Schwarzman Scholars. Schwarzman Scholars is an international scholarship program founded by American financier Stephen A. Schwarzman. The most significant program of its kind since the Rhodes Trust, Schwarzman Scholars is creating a historic new path for the next generation of global leaders. See https://www.schwarzmanscholars.org/ for further information. 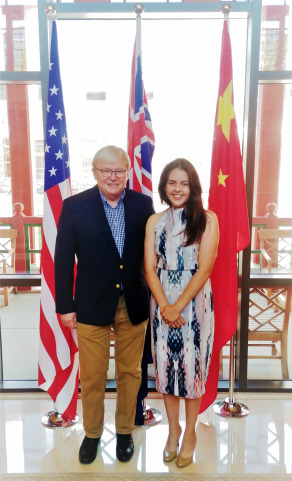