Whilst COVID interruptions impacted the amount of formal sporting competition in semester two, residents made the most of the sports on offer in term 3 and displayed sporting creativity to maintain physical activity throughout the ACT lockdown in term four. 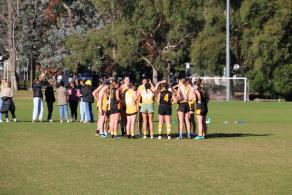 At the beginning of term three, mixed social netball made its ISO debut and it proved to be very popular with both male and non-male identifying residents. With player skills ranging from representative level to having never played before, the social games provided quality entertainment for our passionate spectators and left our Burg netballers hungry for social netball victory in 2022.

Training for Inward Bound was well attended by runners from all year levels throughout term three. Although Covid restrictions meant that the event was unable to run this year, the prospect of the event running early next year instead has excited Burg’s runners and spectators alike.

The AFL season was shaping up very nicely as term 3 developed. The team, after a defeat in round 1 against rivals John XXIII College, was able to come together and win a string of games in a row. The highlights of these games include a 52-16 win against Bruce, a much needed victory highlighting the team’s ability to bounce back. As pool games came to a close, Burgmann sat in 2nd place in the top pool. However, as Covid-19 so often does, lockdown called an end to all ISO sport for the year and with it the opportunity to win back-to-back-to-back premierships eluded us. Next year the team will have a similar look and feel with the goal clearly set from the outset: win a 3rd premiership on the trot. 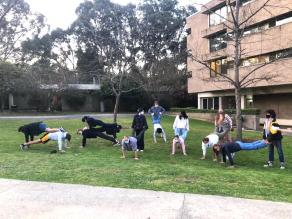 Both male identifying and non-male identifying soccer kicked off vast enthusiasm and a strong eagerness to play footy in term 3. Despite Pip’s ferocious defending, the non-male identifying team began with a tough game against Fenner resulting in a 0-0 draw. With continued hard effort, their next game against Lodge proved tougher than the first with a 1-3 finish. For the male-identifying team, despite two tough games against Lodge (1-2) and B&G (2-3), their withstanding grit and determination made them the favourite for their upcoming games. Alas, with covid lockdown in our sights, the soccer season was drawn to a close after only two games. A tough blow for our Burgmann soccer fanatics, but a great effort across the board that displayed high hopes for next season.

To provide some much-needed comedic relief and physical activity over lockdown, we held a covid-safe Inter-floor sports competition across the mid semester break. This was really well received by residents, who drew upon some intense floor spirit to produce some creative and fun results. Highlights included 2H’s TikTok confessing their love for backvo squash and Kristian Jongeling’s 17km Star Wars themed Strava art for 3B. Final leaderboard positions were tightly contested, with final results putting 2H on top, followed by 3B and 1H in second and third place respectively. In the absence of formal interhall sport, it was great to have a sense of sportsmanship and camaraderie, and we would love to see this interfloor competition continue in some form next year.

As the year draws to a close, we are proud to reflect upon the sportsmanship, inclusivity and passion displayed by Burgmann residents throughout their sporting endeavours across the year. At the end of term three we were placed third on the ISO shield, a position that has left the sporting community eager to go two better next year. We wish the incoming sports reps Fenna, Greta, James and Callum all the best, and we can’t wait to see where they take Burg sport in 2022.