In 2021, Burgmann College and the indigo foundation partnered to establish the Equality Prize to be awarded annually on a continuing basis to a Burgmann College resident or member of our alumni who has contributed significantly in any way to reducing inequality amongst people in any of its forms.

With thanks to the generous support of the BillBerry Bluestocking Fund of the Greater Good Foundation and a number of Burgmann College alumni, each award attracted a $1000 prize.  Winners were announced at the College’s 50th Anniversary Valete Dinner at the National Arboretum, Canberra, on 24 November 2021. 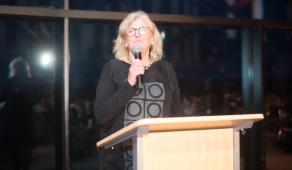 Louisa was nominated and recognised for her substantial contribution to human rights, especially in the refugee area and at some cost to her own career.  She showed leadership from the time that she arrived at Burgmann College, establishing a college partnership with the Cambodian-based NGO, Build Bonnie’s Dream, and other initiatives, including volunteering with the indigo foundation.  After initially pursuing a legal career in private practice, she left the security of that career to return to human rights work, first with the UNHCR in Ecuador and then as a secondment to the Public Interest Advocacy Centre, leading to her pursuing further studies in relation to refugee work at the University of Oxford.  Since then, she has worked as a Research Associate for the Norwegian Refugee Council’s Internal Displacement Monitoring Centre and written or co-authored a number of important works. She is described by referees as having “unwaveringly demonstrated dedication and professionalism” and as “an exceptional leader who stood out … for her maturity, humanity and professionalism.” In a challenging world, especially for displaced persons, her advocacy, research and service provide an outstanding contribution.

Currently working in Geneva, Switzerland, Louisa was not able to attend to receive the award in person. Lousia offered the following words of thanks which were shared during the presentation:

“A huge thank you to Burgmann College, the indigo foundation and the Greater Good Foundation’s BillBerry Bluestocking Fund for this generous award. I’m constantly blown away to hear about the amazing things former and current Burgmann Ressies are up to so it was such an honour to have even been considered for this prize and a huge surprise to now be the recipient. I’ve always admired the indigo foundation’s slogan “the first thing we offer is respect”. That commitment to respecting others and promoting equality shines through in all of indigo’s projects and closely aligns with the values and culture that are fostered at Burgmann. As I sit in my freezing apartment in Geneva, I can definitely feel the FOMO kicking in but I hope you all enjoy the celebrations tonight. Many thanks again to the selection committee for this wonderful honour.”

Rosie Proctor was nominated and recognised for her work in human rights, which she commenced while still a student, identifying improper work practices as a critical issue in the present time, and establishing Canberra Students for Fair Work.  Rosie uncovered serious abuses and failures which she publicised to raise awareness and encourage action.  This experience led her to volunteer for Unions ACT and she has continued to work to prevent abuse and exploitation, despite facing difficulties and challenges.  She has built a long-term campaign and movement, activating young workers.  Her substantial contribution will help shape fairer, safer and healthier workplaces and will make a major contribution to the rights of vulnerable and disadvantaged workers and to fair employment.

Rosie offered the following words of thanks which were shared during the presentation:

"I’d like to thank Burgmann College, the Indigo Foundation and the Greater Good Foundation for recognising my contributions to helping to amplify the voices and experiences of young workers and campaigning to make work safer and fairer for us all. Every day as an Organiser at the ACT Young Workers Centre, I hear stories from young workers about feeling unsafe at work, or knowing that we’re being underpaid and overworked and yet finding it difficult to speak up in our workplaces. Many young workers, especially young migrant workers, work multiple jobs and must juggle unreliable and unpredictable access to work and income.

I remember coming from long shifts at a restaurant in the city while I was living at Burgmann and telling stories at tim tams about what happened that shift. After realising how many of my peers, co-workers, friends and neighbours were all too familiar with my experiences, I decided to start sharing these stories, taking action and raising awareness around the experiences of young workers in the ACT. This led me to help establish Canberra Students for Fair Work, to volunteer with UnionsACT and then become an Organiser at The Young Workers Centre. I have seen first-hand how having our wages stolen or feeling unsafe at work can impact upon our livelihoods, and on our mental health and well-being into the future. I encourage all of you to reach out to your friends and check that they are getting paid their super and feeling safe at work. The Young Workers Centre and WorkSafe ACT is always here to offer support and advice.

Thank you again for this opportunity and having recently graduated from my law degree I very much look forward to continuing to help shape a world of work where we are all guaranteed healthier and safer workplaces. A big congratulations on finishing the year and have a wonderful rest of the night."

The College is honoured to partner with the indigo foundation on this award and proud to acknowledge the impact and achievement of the two 2021 recipients.