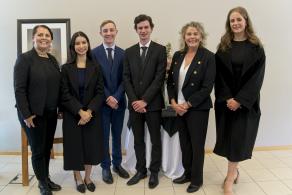 The four ANU based 2020 & 2021 Charles Hawker Scholars received their awards at Burgmann College this morning and the two SA based scholars attended a function at Government House in Adelaide on Monday.

The four ANU based 2020 & 2021 Charles Hawker Scholars are in residence at Burgmann College and are studying a range of courses at the ANU.

Ms. Sai CAMPBELL was born in Thailand and grew up in Blackburn South. She was educated at Presbyterian Ladies’ College; Burwood Vic. Sai is a third year ANU student enrolled in the Bachelor of Philosophy (Ph.B.) Science degree.

Mr. Kristian JONGELING from Kingsley was educated at Hale School in Perth WA. Kristian is a second year ANU student enrolled in Bachelor of Laws (Hons) and Bachelor of Politics, Philosophy and Economics (PPE) degrees.

Miss Jae BRIEFFIES grew up in Perth. She was educated at Willetton Senior High School WA and has completed her first semester at the ANU in 2020. Jae is enrolled in the Bachelor of Law (Hons) and Bachelor of International Relations degrees at the ANU.

Mr. Benjamin NOLAN is from the Sutherland Shire. He was educated at Kirrawee High School in Sydney NSW. Benjamin is enrolled in Bachelor of International Relations and Bachelor of Politics, Philosophy and Economics degrees at the ANU.

“They are a talented group of young scholars from across the country who will no doubt make major contributions to Australia in future years. I wish them well in their studies,” NFF President Ms. Fiona Simson said.

Mrs. Lilias Needham established the Charles Hawker Scholarship in memory of her brother Charles Allan Seymour Hawker. These residential scholarships are valued at up to $60,000 over three years. It is one of the most generous privately funded scholarships available to undergraduate and postgraduate students in Australia.

Since 1990, the Trustees have awarded more than six million dollars to 132 young Australians, including a significant number from regional areas. The six successful students were from an Australia wide field of 223 applicants.

Postgraduate Charles Hawker Scholars are able to follow in Charles Hawker’s footsteps by studying at the University of Cambridge UK.

There are a number of scholarships awarded each year. The Trustees offer them to capable students of principle and character, who are committed to Australia’s future. The Charles Hawker Scholarship perpetuates the memory and commemorates the achievements of one of Australia’s most respected pastoral pioneers.

“C.A.S. Hawker was a truly remarkable man and a great Australian. This scholarship is a fitting tribute to his memory and each of these scholars is a much-deserved recipient,” Hawker family member and Trustee Mr. Andrew Hawker said at the delayed Burgmann College presentation. Selection is based on personal qualities as well as academic ability. Applications for the 2022 Charles Hawker Scholarships open on 6 December 2021 and close on 7 January 2022. An application form and further information are available from the scholarship website www.hawkerscholarship.org or by contacting the secretary to the Trustees on 08 8127 1654. 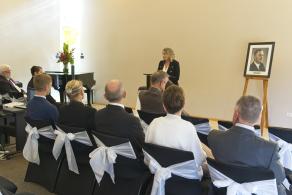 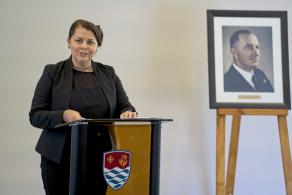 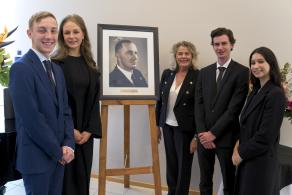 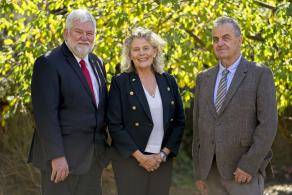